Stan Lee: The Passing of a True Hero

He was one of the most influential creators of the 20th century and, until now, saw his comic book characters and stories adapted into films, video games, television shows, and made into countless forms of merchandise throughout the world. This legend inspired people around the world to embrace creativity and imagination, and reminded us that the power of humanity was truly every hero’s greatest gift, not the extraordinary powers that were bestowed upon them. The name of this legend was Stan Lee, originally Stanley Martin Lieber, and although he has passed away, his work and influence on pop-culture will undoubtedly live on for centuries to come. 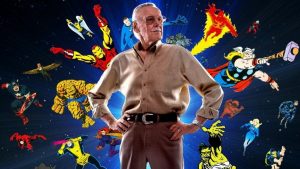 Today the names of Spider-Man, The Incredible Hulk, and Iron Man are some of the most widely known heroes of all time. Stan Lee played a major role in creating all of these characters, and was also involved in creating Daredevil, Doctor Strange, and Black Panther, not to mention his creation of Marvel’s most iconic superhero teams, The Avengers, The X-Men, and The Fantastic Four. Along with the characters themselves, he inspired a completely different way of writing superheroes, and effectively made comic book characters more flawed, relatable, and human. Stan Lee’s heroes, in contrast to many of the past, struggled between their costumed and ordinary lives and, as a result, treated readers to inspiring stories of heroes who constantly had to remind themselves what they believed in and what they were fighting for.

Take Spider-Man, for instance, and how Stan Lee’s method of creating characters led to the now iconic phrase, “with great power there must also come — great responsibility,” as it was originally told in Spider-Man’s first appearance, Amazing Fantasy #15. As popular as previous heroes Batman, Superman, and Captain America were, their personalities and beliefs were far more simplistic, and because they were less realistic, readers were likely not as motivated to see them succeed as a character who struggles, falls, and rises again. Of course, after Stan Lee revolutionized the superhero, these older characters began to shift, and we were able to see more human interpretations of those classic heroes.

As important as Lee’s creations were and still are, it’s important that as more years pass, we not only remember his work, but also the man that he was. At 95 years old, he was still extraordinarily enthusiastic, and even after the passing of his wife Joan, Stan Lee continued to excite us with his legendary cameos and convention appearances. As awe-inspiring as his creations may be, we should also remember the story of Stan Lee himself, working from his teenage years in New York to help provide for his family of immigrants. One of the family members whom he supported was his younger brother, Larry Lieber, who also co-created some of Marvel’s heroes, including Iron Man and Thor.

One can see, without a doubt, Stan Lee’s influence in modern day pop-culture, and fans of Marvel and all superheroes alike owe so much to Stan Lee’s work. We still have some cameos from Stan to look forward to in upcoming films, but we’ll still be feeling the loss of this legend for years to come. For now though, we remember Lee’s legacy, and move forward, remembering Stan “The Man” Lee’s famous catchphrase: “Excelsior!”

One Response to “Stan Lee: The Passing of a True Hero”