Synecdoche, New York: The Greatest Film of All Time 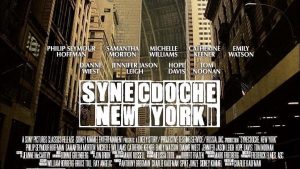 “Everything is more complicated than you think. You only see a tenth of what is true. There are a million little strings attached to every choice you make; you can destroy your life every time you choose. But maybe you won’t know for twenty years. And you’ll never ever trace it to its source. And you only get one chance to play it out. Just try and figure out your own divorce. And they say there is no fate, but there is: it’s what you create. Even though the world goes on for eons and eons, you are here for a fraction of a fraction of a second. Most of your time is spent being dead or not yet born. But while alive, you wait in vain, wasting years, for a phone call or a letter or a look from someone or something to make it all right. And it never comes or it seems to but doesn’t really. And so you spend your time in vague regret or vaguer hope for something good to come along. Something to make you feel connected, to make you feel whole, to make you feel loved.”

It is what many of us perceive as a means to an end, such as a way to get out of the house, or even more simply just pass the time. But film critics such as myself view film as a lifestyle, and a way to see yourself in the shoes of the protagonist and his or her shortcomings and failures as well as their upbringings and successes. But throughout my tenure on Earth, there has only been one film I have seen where I can fit myself perfectly into the protagonist’s story. What film is that, you might ask? Synecdoche, New York. 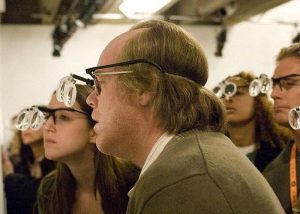 Charlie Kaufman’s debut feature is nothing short of immaculate in its very subtle feats of excellence and poignant symbolism. The film stars Phillip Seymour Hoffman as Caden Cotard, which by its very nature already gives us a look at the fantastic use(s) of symbols in this film. If you weren’t already aware, the Cotard delusion is a psychological disorder in which one believes he or she is already dead, which describes the story of Caden. At the beginning of the film, we see the juxtaposition of Caden and his wife, Adele, through many obvious scenarios. For instance, Adele is violently coughing without a care, shoving it off as a cold or some allergy. But Caden constantly views the world around him as a danger to himself, and this becomes evident every time he feels pain. He truly believes he has a plethora of things that are wrong with him, but don’t we all? It is his closeted and hidden self that causes him to seek meaning in his life. 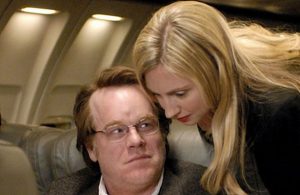 Later in the film, we discover that Adele and Caden have an extremely rocky marriage and are practically on the splits. Before the events of the film, they had apparently planned to travel to Berlin, but Adele convinces Caden that some time apart would do them both well. This later proves to be a farce as Adele never returns back home, leaving Caden alone and confused. He begins to grow more consumed with his plays, still struggling to find something that means EVERYTHING to him to fill the void of his lost daughter and ex-wife. He falls for one of his actresses, Claire, and feels just for a split second that his life is somehow back together. Lo and behold, he finds his daughter on an advertisement nude and tattooed, and decides to pursue his old life in hopes of permanently regaining some sort of clarity in what has been in his terms, a life of pain and sadness. He meets up with Maria, Adele’s friend, who explains that he isn’t able to see his daughter. What Caden says next is extremely important to the way Kaufman uses the element of time in this film.

Maria: “She’s almost over eleven now. She’s my muse. I love her.” 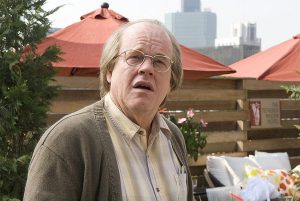 Caden has lost track of time. He has lost himself in a black hole of literal space and time while trying to pursue what was his old life, because it became evident that his temporary happiness wasn’t suitable enough to his liking. Just when the sun looks like it is about to set, Caden receives a MacArthur Fellowship, which allows him to pursue his dream of art without needing to worry about financial restrictions. He decides to create an extremely realistic play about life (more on death, but it isn’t initially implied) which is found to be extremely ironic later on in the film. Claire eventually leaves him, and before the audience can bat an eye, years and years go by as we hop from sequence to sequence. Caden’s mind is on autopilot as he tries to decipher what is reality and what is fake. His play has become so painfully realistic and telling that he becomes even more utterly devoted to finishing it, while simultaneously trying to give his life meaning before he goes.

Earlier in the film, Caden develops a friendship with an associate that works for him named Hazel. At that point in his life, Caden was distraught, being that his wife had abandoned them and taken his creation with her, vandalizing her with streaks of artificiality in the form of tattoos. Hazel quickly became attracted to Caden, and Caden most likely felt similar in that moment, though it was hard to tell. One night, they go out to a bar and have a couple of drinks before retreating back to Hazel’s place at her behest. She makes a sexual advance at Caden, but he sorrowfully declines the offer, playing in to another one of this film’s greatest themes: regret. We see how time treats both characters. Hazel, unafraid of death, buys a house that is on fire. At first she is scared and hesitant, but takes the house, dying in it later in the film due to smoke inhalation. She marries a man named Derek and has kids with him, while Caden goes through a miserable marriage. Later on in the film, both end their miserable respective companionships, and find themselves working together for the success of Caden’s play. Because I can’t possibly cover the whole film coherently, there is one last and final point I do want to touch on before I finish the review, and it is quite possibly my favorite line in any movie said by Hazel.

“The end is built into the beginning.” 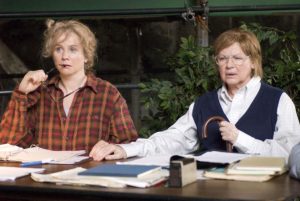 This excellently explains many events throughout the film. The fade in and out at the very beginning and end of the feature. When Hazel buys the house and is worried this house will be her cause of death but stays anyway, she represents the line itself. At the beginning of the film, we zoom in on a clock that reads three times: 7:43, 7:44, and 7:45. In the final scene of the film, we hear as a futuristic voice dictates into Caden’s ear: “Now you are here, it’s 7:43. Now you are here, it’s 7:44. Now you are—gone. Caden has been dead this entire time. In fact, Caden was never really Caden. We learn later on in the film that Caden feels more like himself when he cleans, evidently explained when he goes to Adele’s apartment. The old woman outside asks if Caden is an Ellen Bascomb, to which he hesitantly says “yes.” Caden is now his true self, as he leaves all his prior anxieties behind. He even gets another person to play the role of Caden, being as he isn’t this person anymore. Caden was simply a symbol of anxiety and loss, being as how we as an audience follow his miserable exploits throughout most of his adult life. It isn’t until he becomes the character of Ellen that he truly discovers his/her real self, leaving behind his/her challenges and issues in the past.

Obviously, there were some parts of the film I didn’t get to touch on either completely or partly, and that’s because Synecdoche, New York is as complex as complex can get. It provides an introspective look into the life of a playwright who is trying to simply find his/her identity in the eyes of misery and challenges. It is, while very complex and sometimes fantastic in its elements, very realist in its way of telling others of life itself. It doesn’t sugarcoat much, and warns against much regret and shame. If you haven’t seen Synecdoche, New York already, be sure to watch it and show Charlie Kaufman some well-deserved love.