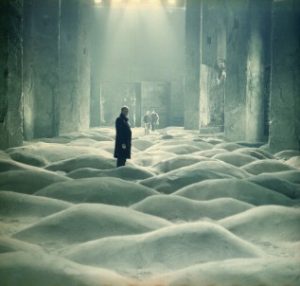 I had never wanted to write an article about Tarkovsky’s masterpiece. I had always felt that to view the film in any medium and in any thought other than the means in which it was originally intended for would be extremely limiting in scope. However, I now believe that the communication of knowledge and expression of ideals is exactly what Tarkovsky had hoped to achieve with his 1979 film. I, myself, had the pleasure of seeing Tarkovsky’s Stalker in the Coral Gables Art Cinema, an environment of communality that only propagates the essence of the film. Before you read this review, I implore you to watch the film for yourself in hopes that your viewing of the film will be unadulterated and unlimited, and, hopefully, wholly opposite of my beliefs.
Loosely based on the 1971 novel Roadside Picnic, Tarkovsky’s Stalker begins with a monochromatic depiction of rural life within the USSR. This rural life, however, is one that has been punctured by other worldly aspects. The film begins in media res and, over time, the audience becomes acquainted with, but never fully knowing, the world in which the story takes place. Tarkovsky’s self proclaimed poetic filmmaking eases the viewer in with a gradual introduction to the characters of the film. Tarkovsky’s characters are one dimensional in nature (characters are not given names, but rather go by names such as Stalker, Professor, and Writer), but it is in the operation of this one dimension—Tarkovsky’s ability to personify conflicting opinions as characters in the film—that Stalker accentuates its most profound grandeur. The story centers around a “Stalker”, a man whose occupation consists of taking paying participants to “The Zone”, a highly guarded area that appeared on earth a few years prior by, seemingly, unearthly forces. After elaborately avoiding and evading the soldiers who guard the border of the zone, the Stalker would then lead the patrons to “The Room”, a place where it is foretold that wishes will be granted and all earthly desires will be fulfilled.
To place the emphasis on its science fiction aspects, however, would be to discredit the aspect of the film that bolstered it to critical acclaim; the journey. With a run time of 2 hours and 40 minutes, a large portion of the film is dedicated to the nonlinear journey of the trio of characters in search of the room. Traveling through a variety of settings and encountering new discoveries with each movement, no scene is wasted as all lend themselves to furthering the already complex statement Tarkovsky looks to express. The conversations range from topic to topic but tend to revolve around a similar theme: motive. Each character—writer, professor, stalker—has their own motives, motives that are often different than those that stated and often change throughout the film. The main conflict for Stalker is dealing with the death of a previous stalker “Porcupine”. Porcupine was a mentor for Stalker and had, at a time, the same occupation as our Stalker. On one trek to the zone, however, Porcupine’s brother was killed. Determined to bring his brother back, Porcupine enters into the Room. While there, Porcupine is given his deepest desire; a large sum of cash. Angered at the Room and terrified in the possibility that he had secretly desired the money over the return of his brother, Porcupine takes his life. Aware of this, Stalker realizes and warns that the Room does grant wishes, but these wishes can be those that exist within the unconscious rather than those which are expressed. When the trio comes close to entering the Room, they engage in a heated verbal argument regarding entering the Room. Despite their initial dedication towards entering the Room, the trio stand outside the room paralyzed in fear of what there is to be found inside.
Tarkovsky’s poetic writing and directing style allows for new interpretations of the film on each viewing. The non-linear story telling allows for certain aspects to gain new consideration and thus revealing new lessons. The film is one of an organic nature. There is a hint of religious undertones despite not making significant allusions to the theme itself. There is a sense of veneration in the film—that the events that take place are one of divine essence—and, when paired with the motif of faith, of going against all notions of logic and believing in something intangible, lends to Tarkovsky’s attempt to create an aura of spirituality around the film.

Though Tarkovsky may not be well known among most mainstream audiences, that does not mean that these audiences don’t know Tarkovsky. A recent scene in the action film Atomic Blonde used the scene of the trio outside the Room as a backdrop for a scene.

Directors Wim Wenders and Lars Von Trier have both thanked Tarkovsky in the end credits of their film, with Lars Von Trier going so far as to say that he is blatantly stealing Tarkovsky’s signature style. Films like Annihilation feature significant Tarkovskyian influences, primarily by the usage of long tracking shots and cameras that linger over characters after their done talking. Tarkovsky hopes that, at the very least, his poetic style and structure will leave his audience with moments of illumination. And what are moments of illumination if not momentarily felt truth?