The Downfall of the SAT 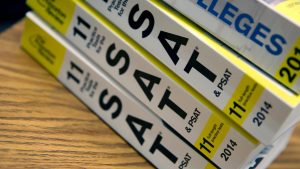 Since before most can remember, the SAT has played a crucial role in getting into college, and heavily influences the decisions of admissions counselors. However, due to the rise in tutoring, the test no longer offers an equal opportunity for all participants.

The SAT began in 1920, and was meant to be an unbiased way to help colleges select the best suited students. And for a long time, the test did remain unbiased and gave every student an equal opportunity to do succeed.

However, as time went on, more and more parents began hiring tutors for their kids: a decision that would eventually lead to the downfall of the SAT.

People who have used tutors for the SAT can relate to taking diagnostics, doing preparatory work, getting tips, and just having someone there who knows the ins and outs of the test to help with any issues.

The problem is that there are many people who cannot afford this commodity. This raises a serious issue because if there are some people that can afford tutors and others who can’t, the people who can’t afford the help are at a huge disadvantage.

Now, there are cheap and free alternatives to tutoring, such as Khan Academy or preparation help offered by the SAT itself. But let’s be honest; myself and most of you reading this article know there’s nearly a complete disconnect between students and a computer, compared to students and a tutor. This requires more discipline and time and will in no way compete with the help offered by a specialized and experienced tutor.

Yet another issue arises in that one’s success in the SAT can help them get scholarships and possibly even a full ride, which can save families thousands upon thousands in tuition.

As a result, the SAT is no longer a test that gives everyone an equal opportunity; it is a test that favors the rich and opposes the poor, like some sort of crooked Robin Hood. Success on the SAT is no longer based on who’s better educated or even on who deserves it most, but instead on who can afford the best tutor. That simply shouldn’t be the way people become more qualified that others to go to college.

These issues haven’t gone unnoticed, as some colleges have stopped accepting standardized tests, among whom are Wake Forest, NYU, Cornell, American University, and a few others. For the most part, however, most colleges continue to require the test.

As for the future of the SAT, the test can go down one of two paths. The first path is darker; in this path, colleges keep requiring the SAT, tutoring continues to rise, and the poor continue to be at a huge disadvantage for a better education.

The other path is much brighter and fortunately, due to the rise in colleges not accepting the test, seems more likely. In this path, most colleges eventually stop requiring the SAT, and admissions are based on actual merit rather than who can afford better prep.

In this path, getting into college will finally be just the way it should be: an equal opportunity for all, regardless of class and wealth.