In the spirit and form of “The Prologue” to The Canterbury Tales, students in English 12 Honors were challenged to write about a CCHS teacher in Chaucerian style. What follows are the ten best describing Mrs. Cofresi, Mr. Linfors, Dr. Dugard, Mr. Cunningham, Mr. O’Brien, Mr. Ortega, Mr. Gonzalez, Mrs. Chomat, Br. Ken Curtin, and Mr. Crossman. 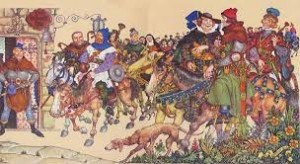 Lady from the Bronx

A fun lady born and raised in the Bronx,

A borough drowned in the sound of car honks.

The cold brutal winters grew old on her,

And she chose to move to a city warmer.

When in Miami, she met her husband,

He enjoyed music and was in a band.

She became a good religion teacher,

I was scared at first, she kept her room clean.

She assigned the biggest project I’ve had,

Took a while to finish, not to mention

We had a thirty minute presentation.

Although she was tough, I liked her the best,

Aside from the times she gave us hard tests.

She does not watch sports unless it’s her spurs,

She is great but with that thought I can’t concur.

Mrs. Cofresi is a funny gal,

On a bad day she would boost my morale.

I have her again this year and can’t wait,

Senior year I can have her with a clean slate.

This year I will get on the Wall of Weird,

I can see her board spelling Joseph Beaird.

Linfors the Blue, a small wizard he seems,

widely traveled the woods of brown and green.

His staff in his hand, and sword in its hilt,

he goes on journeys. Magically built,

his seat of sapping takes ones intellect

and adds to his own for greater effect.

Well on a bright day, a fool came along,

as big as an ogre, and just as strong,

who hoped to smite this grand wizard. He planned

all he could and thought of a scheme quite grand

to catch the wizard at bay. The fool had

thought to lay some traps, but was surely mad

to believe he could outwit the wizard.

tricks could not surprise him. The fool’s plan fell

apart and a fight between the two well

from the staff until Linfors shot a blue,

blazing light from it. The brute lost his sight

Unluckily, the fool fell on a chair

and lost all skill from his feet to his hair.

Linfors the Blue, looking not at all small,

for he’s the one wizard to rule them all.

There was a Deacon, shepherd since twenty,

Heart so immense and titles so plenty.

Christ was first, the Cowboys a close second.

A man after losses to be reckoned

with. Yet there is one thing he values more

Than either item I mentioned before.

For he’s not most belated when preaching,

But rather when in the classroom teaching.

His love for teaching is exceeded not.

Passion burns when any cheater is caught.

His booming voice will echo to the bell,

And make the lives for sleeping students hell.

For any person brave enough to play

An iPad game, he will ruin their day.

He flings the tablet like a shot put pro

As students watch it sail in awe below.

As the hook which hauls a fifty pound carp.

“Sieze the day” he’ll yell in the mirror loud

To make Jesus, the crowd tamer, so proud.

Despite his love, students weren’t enthused.

“Don’t call me sir!” he exclaims with a shout,

“The name’s Doctor Deacon, don’t wear it out.”

The Soviet Man of Mystery

It is said that there is a man who comes
From Mother Russia. A talented man who strums

The guitar with the upmost beauty. His
Vast knowledge of the world makes him a wiz
Of the world. His high class and elegance
Only causes weak knees and women to dance.

His silence is deadly to those who doubt
His superiority. He figures out
Complex problems with ease as he sits at
His large desk wearing his bear-cat fur hat.
A true Soviet, this man. His brutal
Ways are kept secret. Resistance is futile.
Mother Russia! He cries for his homeland.
A saddened man who has wishes to stand
Before his class and profess his love for
Mother Russia. He loves both World Wars or

The American Civil War. He knows
His role is a simple one. He shows prose
In class like that of a true Soviet
Man. He knows what is inappropriate,
In class and stares into your soul to see
The fear you oh so fear which is him, plea
If you feel the need. What’s his name you ask?

Mr. O’Brien is the man’s name,

At Columbus, he has a lot of fame.

For he is honest, funny, and helpful.

Although at times, he could be forgetful.

History is his main subject to teach.

Whether it be Bill Clinton being impeached,

Or the communist regime of Castro,

He discusses all of these fiascos.

His class is full of flags, ranging in design.

All of them so pristine, all so divine!

He now runs a club, “Stand for the Silent.”

He holds all his meetings in his island.

We discuss the plague of bullying, especially online.

Some students call his class OB-City

And others just see him as a hippy.

If a student needs help, he will be there.

Whether it be in school or at Times Square.

To sum it all up he’s a great guy.

If you say otherwise, you are a lie!

All jokes aside, he has taught me a lot.

No man or woman could take his spot.

His knowledge is beyond all others I’ve seen.

The Man Who Swallowed a Calculator

As his stomach rumbled, he looked around

For an appetizing meal. What he found

Would seem unorthodox to most people,

Yet his strength at the moment was feeble.

Under thousands of papers was a tool

Employed by merely the greatest of fools.

He grasped the computing device tightly

And swallowed every bit so mightily.

Through his veins as he began transforming.

He became Ortega with no warning.

Any calculus problem could be solved

In seconds now since Wency had evolved.

He even reached infinity three-peat,

Ortega has pursued his chosen path

He allowed freshmen to believe in hope

For themselves by teaching them simple slopes.

This confidence dissipates as insane

Mr. Ortega is a great teacher,

Enough to be Marvel’s finest feature.

I went to him in my freshmen school year

I asked him to become one of the peer

Ministers in the campus ministry

To join us” he said. I was filled with glee.

Because I did not know what to do and

I gave my first talk. Everyone was stunned.

Throughout the year, I did several more

And he helped me as if it were a chore.

At the end of April, he came to me

And asked me if in May I will be free.

I did not know so then I felt hopeless.

“It is a retreat house in Esopus,

New York,” he said. I struck into motion

And called my mom immediately to ask.

She most likely wanted to get a flask

Because of the price, but she said yes. “Yay!”

He was happy I was making this trip

Because he knew my leader skills would flip

Now look at me, one of the main leaders.

I thank him for being a great teacher.

Education in chemistry for all,

She teaches in these white Columbus halls.

Chomat is her last name, Terry the first.

Those souls in advanced placement are cursed,

With frightful work and sleep absent at night.

She is of small build, average in height.

The teacher’s hair is of a golden brown,

Her dress code is second to just one now.

Chomat is not one to expose true rage,

She engineers her tests to strike much fear,

To prepare for the AP test that’s near.

This teacher will not give you chemistry;

Rather, you seek knowledge on inquiry.

Solidarity is what she preaches;

Support among students is what’s needed.

The powerpoints long and saturated,

Ain’t enough to get brains calibrated.

Book reading and practice problems are up,

To students to study and make the cut.

Chomat’s strategy is in your favor.

Time and rest is sacrificed to her course,

But high brain-output is yours to take north.

In his office there was a signed baseball,

In a clear glass box not so tall at all,

From a game that we shared so long ago,

Special to me and to him, I now know.

For the Cardinals, Jon Jay was playing.

I left my seat fast without obeying

I came running before we would go.

With tears in his eyes he could not believe,

The impact he had, he could not conceive.

He told me I would do wonderful things.

I felt him present when I got my ring.

I hope my deeds have made him proud of me.

He has helped me become the man you see.

As my days here at school come to a close,

How much he meant to me, I hope he knows.

Remembered for his kindness towards others,

His legacy will forever live on.

The hearts he has shaped are still going strong

He was known as Brother Kenneth Curtin,

A very good man and that was certain.

Goodbye to somebody who was my friend.

You are tremendously missed, Brother Ken.

Crossman: a given legend it is clear

Everyone present in class wants to hear.

He will make you understand anything

And makes certain to teach you everything.

When it comes to books he is always right

It is essential that you read at night.

His essay grading is something to fear

Getting a good grade is reason to cheer.

The vocab quizzes are quite annoying.

Attention if you want your future bright.

When analyzing plots he’s quite the seer

Always late, though he’s had quite the career.

His projects are anything but soothing.

Miss any work, and you’re sure to be losing.

His teaching methods are more than alright

He possesses everything except height.

Defense mechanisms are key to hear,

Forgetting them will make you shed a tear.

When the class is all finished, predicting

The end of a story is addicting.

Crossman’s class can be adequately clear

As long as you are willing to adhere.

By Robert LinforsNovember 13, 2015Creative Writing1 Comment on The Spirit of Geoffrey Chaucer Comes to Columbus

One Reply to “The Spirit of Geoffrey Chaucer Comes to Columbus”