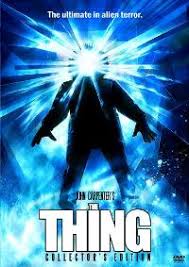 In the current wave of modern horror movies, many audience members have been accustomed to the infamous “jump scare.” The music increases in tempo, the surrounding noises are drowned out, and before the audience has time to prepare itself for the incoming scare, the villain jumps out at the main character (and the viewer) making the audience’s heart skip a beat. Although there are some films that are able to correctly utilize a jump scare (think of the twins from the shining) modern horror movies have fallen guilty to creating predictable jump scares that don’t necessarily “scare” us, just end up startling us. Regan from The Exorcist terrified audiences not because her screen time was accompanied by thunderous music and quick cuts, but because audiences were generally terrified by the practical effects, suspenseful atmosphere and haunting tone that had already been established throughout the movie.

John Carpenter’s The Thing perfects every aspect of the horror movie genre and, even in 1982, featured practical effects that rival those of this time (no seriously, watch this earlier movie and compare it to the 2011 CGI remake). Despite performing disappointingly at the box office (partly due to the graphic visual effects and also being released in the same time frame as Blade Runner and E.T, which took a much more family-orriented viewing of aliens) The Thing garnered a cult following as viewers began to see what it truly was, not just another attempt at a Cronenberg-esque body horror movie, but a movie who’s atmosphere and tone would receive the approval of the master of suspense, Alfred Hitchcock.

From a description of the premise alone, The Thing does not have any outstanding features and could be easily categorized with many other science fiction horror movies of the 80’s. After an extra terrestrial species is found frozen deep near an arctic excavation site, a team of archeologist pull up the remains and store it in there base camp. When the alien disappears among the camp fear and paranoia run rampant through the archeologist as fish slowly learn of the aliens terrifying ability to “absorb and copy the DNA of any life-form it consumes, allowing it to take on its appearance, memories, and mannerisms” according to The Thing‘s Wikipage.

Although the premise of the movie replicates a few genre tropes, the true cinematic value is derived from Carpenter’s masterful directing, a mellow soundtrack that pairs perfectly with the film, and a solemn performance by Kurt Russel that captured the dark and foreboding tone of the film. Combine the constant threat of any member of the small cast being an alien and the close atmosphere brought upon by (a bit cliche, I know) a strong blizzard, The Thing did not have to rely on jump scares to fully terrify audiences. The real fear in this movie is what isn’t shown to us. The scenes that don’t feature the alien are equally as terrifying as those because of Carptenter’s thorough understanding of emotion and tension that is also featured in many of his other films.

What truly makes The Thing a timeless classic was its use of practical effects that easily out perform modern cgi messes. Never has melted bubblegum and plastic terrified audiences as it has in The Thing. Through effective lighting, angles and the creative mind of Rob Bottin, the film’s tone is able to still haunt audiences without being downplayed by unrealistic special effects.

The last thing I will praise John Carpenter’s masterpiece for is what I have referenced most frequently; its tone. The film uses bright colors only sparingly (mostly in the flame throwers that the crew wields) and tends to stay loyal to its blue and grey color pallet. Through the combination of the dark color scheme and constant displays of the bitter arctic cold, the audience is immediately subjected to the cold and isolated setting that the characters themselves experience. The other main contributor to the tone would be the frequent scenes of little drama. Simple conversations between characters appeared to be drawn out and dull, begging the viewer to question the security of the crew and whether the alien will make its next appearance. The alien itself contributes significantly to the mood. The thing is displayed sparingly and in short intervals. There is no scene throughout the film that an appearance by the alien is ruled out, as it is always a threat for the crew. Although the film does utilize one jump scare, it is only amplified by the innovative special effects and by the suspense that has been brought onto the audience since the first act of film.

If films of today could at least make an effort to reciprocate the artistic and masterful directing of Carpenter, jump scares would begin to be used properly and much more sparingly. Despite these allegations, films like The Witch are perfect examples of what modern horror movies are capable of and what they can hopefully become in the near future.