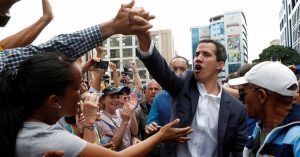 Vice President Mike Pence made headlines yesterday as he told the anti-Maduro protests that they have the United State’s support and that the United States now recognizes Juan Guaidó as the Interim president. A similar response from President Trump agreed with the support, joining other nations (most notably Chile, Argentina and the recently elected right wing president of Brazil Jair Bolsonaro) that have previously claimed the same stance. These protests are the cumulation of years under the leadership of Hugo Chavez and Nicolas Maduro and the failure of Venezuela’s economy. To have a thorough understanding of the situation in Venezuela it is required that one knows the history of both domestic affairs and internal issues, primarily regarding US intervention.
Despite Chávez and Maduro’s self proclamations, they do not operate a socialist economy. Although these claims were heavily propelled in both leaders campaigns, their implementation of these policies never came to fruition as their own greed and corruption brought all collectivization to a stand still. Rather than a socialist economy, Venezuela operates as an oligarchic kleptocracy, with the most significant portion of their GDP coming from oil exports. When Chavez came into power, global oil prices were at an all time high, and with Venezuela sitting on the largest oil reserve in the world (1), Chavez was able to propel Venezuela into a status as the wealthiest Latin American country. It is what he did with these new founded profits, however, that proves that he does not resemble the socialist ideology he originally advertised. Rather than investing this money back into public goods and infrastructure, this new wealth was instead given to Chavez’s supporters and the “Boliburguesía”, a recent phrase used to describe the Venezuelan bourgeois that became rich with Chavez’s presidency. The downfall of Venezuela’s economy would only come 1 year before Chavez’s death. According to the World Bank, oil production accounted for “96% of [Venezuela’s] exports and nearly half of its fiscal revenue.” When oil prices plummeted, so did Venezuela’s economy. Unrest reigned across the country, and with the death of Chavez, there was no real leadership to relieve them. And the appointment of Maduro was not the savior they needed. Another faux-Socialist, under Maduro the private sector still encompassed two thirds of Venezuela’s economy, a similar percentage to the Chavez presidency (2). Inflation rose and 50% of the Venezuelan people faced poverty, as the minimum wage would have to be earned 63 times over in order to be able to afford basic needs (3). Both sides of the political spectrum can agree that there is immediate need of change in Venezuela; however, it is in the methods of change that the disagreement lies. 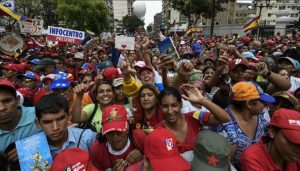 To conduct any reasonable discussion of the situation in Venezuela it is required to withdraw any emotional bias held toward the situation. Those who immigrated from Venezuelan are more than likely to support the US backed coup as they seek to restore their homelands. And this is reasonable. However, a few of those who currently live in Venezuela may have a different opinion on the situation, predominantly those who are of racial minority or of lower classes. The two sides are not split, however, regarding whether or not Maduro is a fit leader or not, but rather the legitimacy of Guadió’s coup d’état. The US’ support of the coup is another installment in the long list of US intervention in Latin America. Countries like Granada, Panama and Venezuela have all been subject to US interference in the last 30 years, and many have been left off much worse than before intervention. However with the current situation in Venezuela it is hard to picture a country that could be worse off than its current standing.
The picture becomes easier to paint, however, when the opinion of each sides are taken into account. Echoing the circumstances that surrounded The Great Schism, the installment of Guaido would leave Venezuela with two leaders, each with large amounts of support. The inevitable conclusion of this partisanship is, at the very least, a cultural split in the country, but a civil war is also a foreseeable situation. However, change is needed in Venezuela. The ideal situation would only begin once the US and other countries withdraw any involvement in the country, involvement that is both beneficial and detrimental. The lifting of US sanctions would allow for more coherent discussion, easier living conditions for the Venezuelans, and traces of an economy that is working towards equilibrium. Once intervention is withdrawn, it is up to the Venezuelan people to elect a leader. Guadió should use the momentum he has recently garnered to get Maduro out of office and hold a democratic election so that the voices of those in Venezuela shall be heard. But that should be the end of his political time in Venezuela. He should harken the cries of the misrepresented in Venezuela and acknowledge that he was not voted into office and his presidency would be illegitimate.

By Joseph PozoJanuary 25, 2019Editorials, NewsLeave a Comment on The Venezuela Affair