Welcome to Wakanda: A Review of Marvel’s Black Panther

Only two months into 2018, and my most anticipated movie of the year is already here. Marvel’s Black Panther, like the nation of Wakanda, is isolated from the rest of the Marvel Universe, and stays within its own borders for the majority of the film. 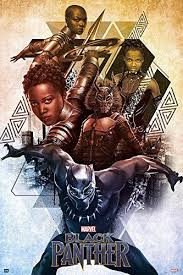 As a comic book fan, I have been waiting for this movie ever since it was announced that Black Panther was joining the Marvel Cinematic Universe. The nation of Wakanda, the kingdom of the Black Panther, is the most technologically advanced nation in the Marvel earth, and seeing it in a live action movie is a dream come true. The visuals in this movie are a pleasure to the eye, and this not only comes from the nation of Wakanda, but also from the vibranium, the sacred Wakandan metal that the nation uses in a multitude of inventions, including the Black Panther’s costume.

King T’Challa’s new Black Panther costume has an awesome design, and its powers are especially cool. The car chase that we glimpsed in the trailer is one of the most entertaining scenes, and we get some of the Black Panther’s coolest moments, as it showcases how powerful he has become.

The nation of Wakanda itself is a beautiful place, varying from grassy plains to snow-covered mountains, with some iconic locations including Warrior Falls, probably the coolest location in the movie, alongside the vibranium mines. The Ancestral Plane, where T’Challa enters to communicate with the Black Panthers and Wakandans of the past, is also a mysterious yet intriguing place.

No nation is great, however, without great people to hold it up. Both the good and evil characters in the movie do a phenomenal job of fleshing out Wakanda. T’Challa is even more heroic a character than he was in Captain America: Civil War, and although his allies are all interesting as well, I’d like to take the remainder of my review to talk about the Panther himself.

With the death of T’Chaka in Captain America: Civil War, his son T’Challa is to become the new king of Wakanda, and T’Challa’s journey to the throne in the first act of the movie shows how prepared he is. During Iron Man and Captain America’s civil war, Black Panther learned a valuable lesson about justice when he stopped Zemo, the villain of the movie, from killing himself, even though T’Challa originally had the intention of killing him to avenge his father. With this gained wisdom in his prior appearance in the Marvel Cinematic Universe, he is already prepared to become a great king when he has his own spotlight, and a great king he does become.

I have hardly seen any perfect reviews of the movie since I saw it myself, despite the praise it has received. I heard some reviewers say that the second act of the film begins to slow down the pacing of the movie, and while I understand where they’re coming from, I disagree. I believe that the second act is still enjoyable, while also slowing down just enough to increase the epic scale of the final act.

As a longtime fan of the character, to see the king of Wakanda portrayed so excellently on the big screen makes me even more excited to see T’Challa again in Avengers: Infinity War. I’m grateful for the amount of effort that went into making this movie both a critical and commercial success.