The Witch: An Analysis of Sin, Outcasts, and Temptation

“O my Lord, my love, how wholly delectable thou art! Let him kiss me with the kisses of his mouth, for his love is sweeter than wine: How lovely is thy countenance! How pleasant are thy embraces! My heart leaps for joy when I hear the voice of thee my Lord, my love, when thou sayest to my soul, thou art her salvation. O my God, my king, what am I but dust! A worm, a rebel, and thine enemy was I, wallowing in the blood and filth of my sins, when thou didst cast the light of Countenance upon me, when thou spread over me the lap of thy love, and saidest that I should live.” 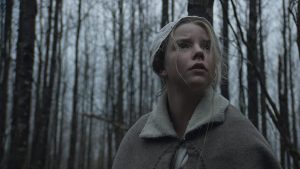 Director Robert Egger’s debut film The VVitch is my favorite film ever put to celluloid. It crafts a sense of fright and horror unlike any other horror flick I’ve seen in recent years, and its themes will stay with the viewer for years to come. The film follows our main protagonist, Thomasin, who with her family, are banished from their village over religious matters, and seek refuge in a wood that houses evil itself. Right away, I want to urge those who haven’t seen this film to do so right away if you love horror, and warn those that haven’t seen this product of brilliance of the spoilers ahead. I will be discussing the themes that Robert Eggers strived to accomplish ever so meticulously, and did so immaculately and amazingly. Without further ado, let us dive into the world of The VVitch. 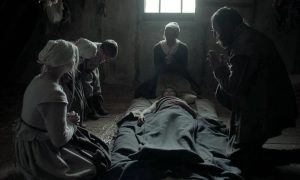 Our protagonist, Thomasin, is immediately separated from her family group in personality and character.  When her family is banished from their New England town, they strive to make things work in a woodland environment. When Thomasin loses her siblings in different situations while accompanying them, she is accused of being a witch by her family, even though that isn’t so. Religion is a large pillar of thought when it comes to the making of this film. Thomasin is an extremely religious young woman at the beginning of this film, but that isn’t so when the credits roll. She strives not to sin in fear of dishonoring her Creator, and this is her eventual downfall. The depiction of Satan in this film takes many forms, including a rabbit and the family’s goat named Black Phillip. Throughout the events of The VVitch, we watch as the family grow ever more abundant in insanity, with the family patriarch William dying at the hands of Black Phillip, and the matriarch dying at the hands of her own daughter. The constant push that her Puritan religion has on her gradually makes Thomasin more and more uncomfortable, and propels her to leave the religion in the film’s final minutes, becoming a witch herself. We see this need and requirement to not sin affect the Father and the Mother, as both grow proficiently in insanity eventually leading to their demise at the hands of Satan himself. 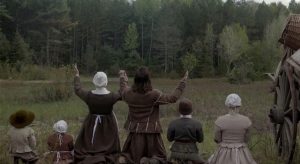 One may label Thomasin as the only outcast in the film, but in reality she really isn’t. Her entire family was cast out of the village in which she lived, therefore in a sense making them ALL outcasts. This term does have a spiritual sense, as well, however. The family members gradually become outcasts in their own home, as they strive to recognize who they are as people. We see the religious decline of William, the Father, as he turns to evil even though it is not explicitly stated. He locks his daughter and other children up in a fit of rage because he has simply lost himself, and has allowed evil to consume him. The mother, having lost more than one of her children, has experienced psychological spiritual trauma, and witnesses her own husband die at the hands of Satan’s temptation. At the end of the film, she blames Thomasin for the demise of the family, foreshadowing Thomasin’s future pact with Satan. She was not explicitly responsible, but lost herself and who she was as a person, as well as her mother. She ends up committing matricide to protect herself, which in the 16th Century would be deemed extremely incorrect in lawful and moral standards. Now, Thomasin is the most outcast she has ever been. 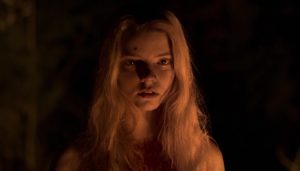 The lingering theme of temptation is one of the many pillars of the film’s religious themes, and leads to the demise of Thomasin’s true identity. At the start of the film, Thomasin avoids temptation swiftly, but it is evident that with each new trick Satan plays on her, she falls deeper and deeper into her eventual fate. This is evident in the ending, which many Christians may find controversial in hindsight. I personally believe that the ending of this film is one of the most frightening, mysterious, and excellently executed feats of cinema in recent decades. After the death of her family at the hands of loss of reality and sin, Black Phillip gestures toward Thomasin to enter a stable, where he reveals himself to be Satan himself. Satan subsequently tempts her to the point of no return, and she embraces who she is, following him deeper into the wood and joining a coven of witches. One can only suspect that she will partake in the same cycle that brought her family to their demise. The film ends with a glorious and haunting final shot, before cutting to black and revealing the name of one of the best directors working today, Robert Eggers. The theme of temptation here is ever so powerful to Christians, and in turn crafts itself into a cautionary tale of what happens if we leave God and reject His love and care. Horror films don’t always have to end happily, as they also have to remind us that evil itself DOES exist, and will continue to tempt us as long as we breathe.

Final Thoughts on The VVitch

The VVitch is not for everyone. It is a portrayal of faith and its ever so disturbing demise at the hands of temptation, loss, and sin. It is a testament to religion itself in the sense that it never portrays one side as overwhelmingly good or bad, and it is up to the viewer to determine who he or she supports. Eggers crafted an amazing script and chose amazing actors and actresses to help bring these vivid and realistic characters to life, and woven into existence a world that in reality isn’t that much different from ours, as temptation, sin, and immorality all exist. I believe that the main moral of the story is that we choose our own destiny, due to the gift of free will given to us by the Divine, and this is simply a cautionary tale in its nature that shows what happens when we stray away from the faith.

3 Responses to “The Witch: An Analysis of Sin, Outcasts, and Temptation”